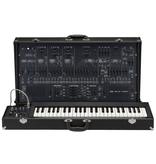 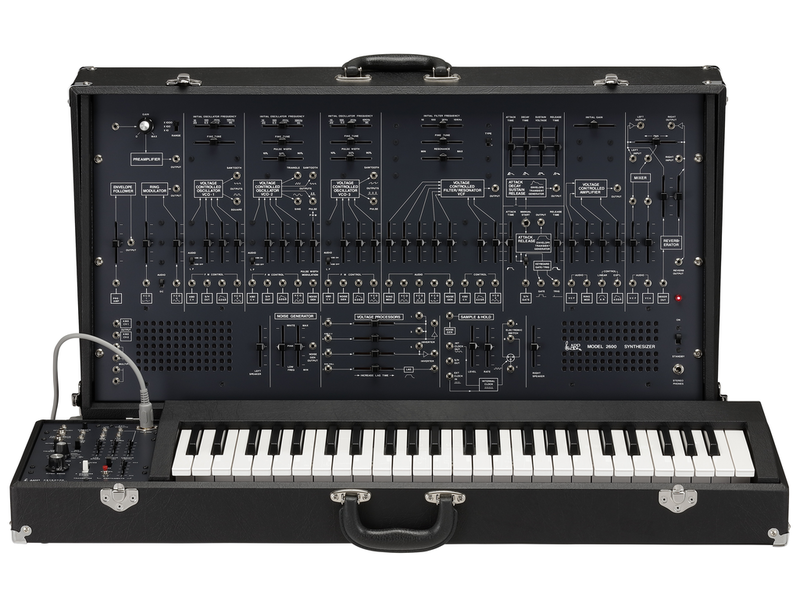 The ARP 2600 is brought back to life in a single, one-time-only production run. Now is your opportunity to own one of the most sought after and coveted instruments from the vintage synthesizer era. This limited-edition release is a loving reproduction of the 2600, handcrafted in Japan and includes USB and DIN-style MIDI connections, XLR audio outputs, plus the improved ARP 3620 Duophonic Keyboard with an added arpeggiator / sequencer. Your new ARP 2600 will arrive in a custom-branded hard shell case, complete with casters. Even today, the ARP 2600 stands as a bridge between the individual elements of modular synthesis and the immediacy of a production / performance instrument. Included are an ample supply of oscillators, envelopes, a filter and amplifier – all of the building blocks of analog synthesis. But the ARP 2600 goes even further, with a spring reverb tank and even a pair of built in monitor speakers. Also present is much of the versatility of a vintage modular system, including a ring modulation, lag and voltage processors, an envelope follower, audio preamp, a clock-able switch, noise source, a sample & hold module, signal inverters, an auxiliary mixer, and even a set of parallel-wired/multi jacks.

The ARP 2600 FS reproduces the sounds of these components at the circuit level. Under the supervision of David Friend, the co-founder of ARP Instruments, parts were carefully selected and every detail was adjusted to replicate the original unit's distinctive synthesis. Nearly every slider and switch on the ARP 2600 front panels is hard wired to specific control source. For example, the front panel controls allow the pitch of Oscillator 1 to be controlled by the keyboard (On/Off switch), the output of the Sample & Hold module (slider), the shape of the ADSR envelope generator (slider), and/or by the sine wave output of Oscillator 2 (slider), and each in varying amounts. These hardwired pathways provide massive amounts of immediate control that make excellent use of all the ARP 2600 has to offer, allowing the ARP 2600 to be played as is – no patching needed. In true modular fashion, inserting a patch cord into the jack associated with any hardwired control overrides that internal connection, letting you create a new signal path of your choosing.

While faithful to the original design, the functionality of the 3620 Keyboard has been greatly enhanced for this limited ARP 2600 release. The 3620 Keyboard contains 49 full-size keys, aftertouch, portamento, and is also duophonic, allowing two keys to be played at once – Single or Multiple Triggering is available. In addition, the duophonic keyboard can use an optional foot switch to lock the interval between any two notes, without retuning the oscillators during performance. Vibrato can be added via a dedicated circuit controlled by aftertouch, or by the onboard LFO (Low Frequency Oscillator), using any of three available waveforms. Most noticeable is the addition of a flexible Arpeggiator that allows a user-defined pattern to be manually sequenced and played back. Still present are the original Pitch Bend knob and the Two Octave Up / Two Octave Down Transpose switch. Connecting the keyboard to the main unit now uses a secure eight-pin din cable.

The ARP 2600 is equipped with two low-impedance XLR outputs (Left and Right) for direct connection to a recording console or sound system – no direct boxes or line-matching transformers are required.