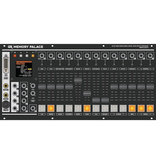 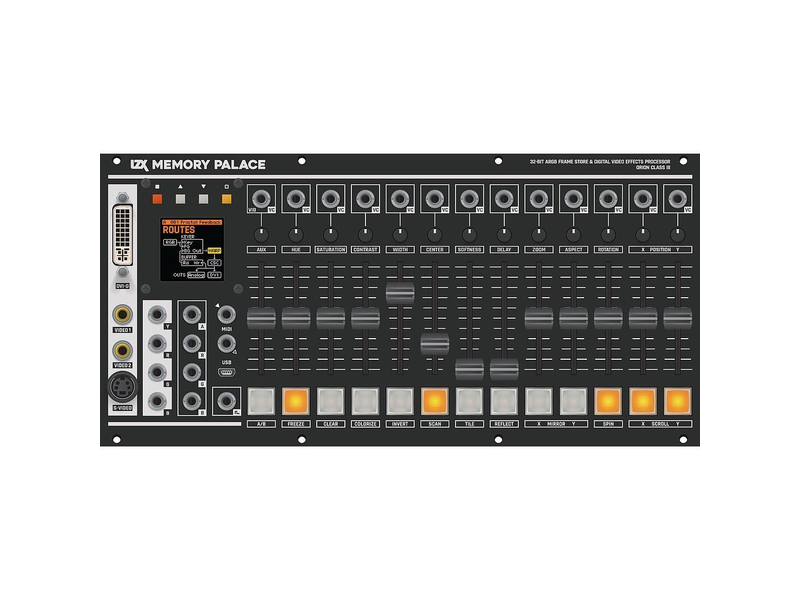 Spatial Processor Functions
Memory Palace's spatial processor is modeled after classic broadcast Digital Video Effects (DVE) processors from the 1980's and 1990's. The spatial processor uses digital frame memory to reinterpret the input image, adjusting its positioning, size, aspect ratio, and rotation angle in a nonlinear fashion:
• Multiple selectable modes: Feedback mode places the spatial effects in the processing chain after the keyer. Painting mode places the spatial effects on the input before the keyer.
• X & Y Position displace the input image horizontally and vertically.
• Zoom scales the size of the input image larger or smaller than its original size.
• Stretch adjusts the horizontal / vertical aspect ratio of the image.
• Rotation rotates the entire image 360 degrees clockwise or counter-clockwise
• Tile mode repeats the buffer image multiple times depending on Zoom and Stretch settings. Kaleidoscopic effects are possible when combined with the rotation control.
• Mosaic mode allows extension of the effects beyond the borders of the input frame.
• Mirror X & Mirror Y functions mirror the entire image across the horizontal and vertical axes.
• X & Y Scroll functions enable continuous movement of the image in any direction, with sliders controlling movement speed.
• Spin function enables continuous clockwise or counter-clockwise rotation of the image with the slider controlling spinning speed.

Frame Buffer Memory Functions
Memory Palace includes uncompressed video memory which stores a stack of the most recent frames it has processed:
• Delay selects the number of frames to delay the image within its feedback loop, allowing complex echoing. While the image is frozen, delay can be used to scan the output across frames in the recent past using the slider or external voltage control. [Designer Note: We have not yet determined the maximum length of frame delay, but it will likely be 2-3 seconds. Since the delay reiterates into the buffer, the actual visual effect of the delay is much longer across time.]
• Feedback controls the amplitude of the buffer memory as it is fed back into the background of the Soft Keyer. Above its center point, the image will blow out to white, and below its center point, the image will fade to black.
• Freeze button freezes the entire buffer, disabling any writing into it. The frozen image will be held at the output until the frame is unfrozen. Freeze frames can be strobed with the external trigger input.
• Clear button clears the image to black. Useful in painting mode when you want to erase the current drawing and start a new one.

In the Box
• The module itself
• Eurorack Power Cable
• 2.1mm barrel 12V DC auxiliary power connector optionally supplies power to Memory Palace's onboard computer to reduce drain on your EuroRack power supply. This can be used with the LZX Vessel case, or with a 1A 12V DC wall-wart power adapter in cases which will not support Memory Palace's power load