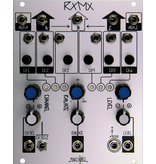 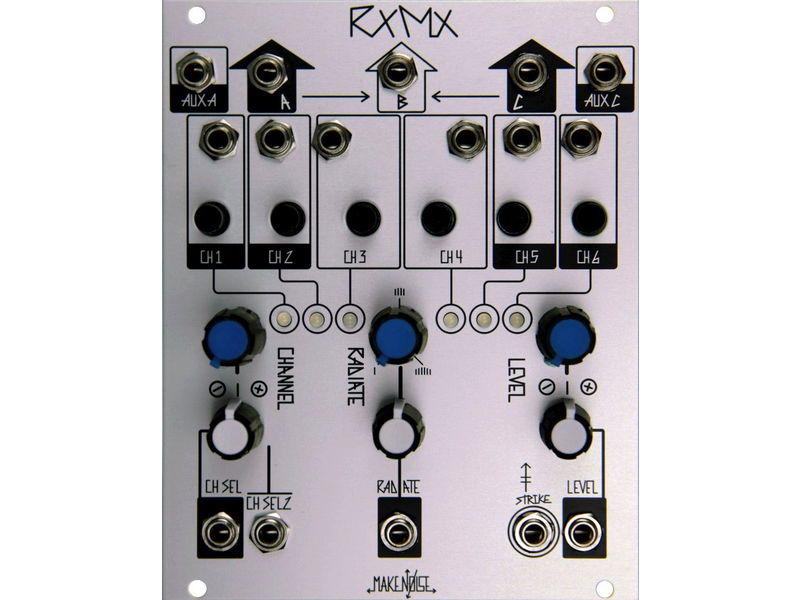 Vactrol-based 6-input, 3-output macro-lowpass gate and signal crossfader, based on Grant Richter's circuit idea for applying “cadavre exquis” (aka exquisite corpse, a technique of serial blind composition) to modular synthesis. If modulated by a Wogglebug, one will achieve modular “cadavre exquis.” If patch programmed using a sequencer such as the Pressure Points/ BRAINS or René, modular “mélanger automatique” (automatic re-mixing) could be achieved. The Level and Strike parameters are similar to those of the Optomix where Level is controlling amplitude and frequency content simultaneously and Strike triggers the LPG (Low Pass Gate) circuit by “plucking” or “pinging” the vactrol, thus allowing it to impart its magically slow response time upon the amplitude of the signal being processed. The Channel parameter selects which of the 6 Low Pass Gate circuits is driven by the Level and Strike parameters and the Radiate parameter turns on channels adjacent to the selected channel. At maximum Radiate settings all six channels become active simultaneously. Radiate therefore allows for voltage control of the complexity of the mix ranging from 1 to 6 active sound sources, while Channel selects the focal point of the mix.

Features
• Uses low pass gates for level control and crossfading, excels at smooth dynamic blending and percussive animation of related or unrelated signals
• Expansion header allows for unpatched connection to DPO for waveform scanning
• Expansion header allows for unpatched connection to 6 bands of the FXDf Fixed Filter module allowing for voltage controlled, percussive spectral animation
• Cable patched to any RxMx input jack will break the above mentioned normalization for the respective channel
• Patch programmable to have one six-channel, or one four-channel and one two-channel, or three two-channel outputs
• Aux A and Aux C inputs for adding two more signals to the mix such as the SUM Outs from the Optomix and modDemix, thus allowing for larger more complex mixes