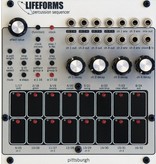 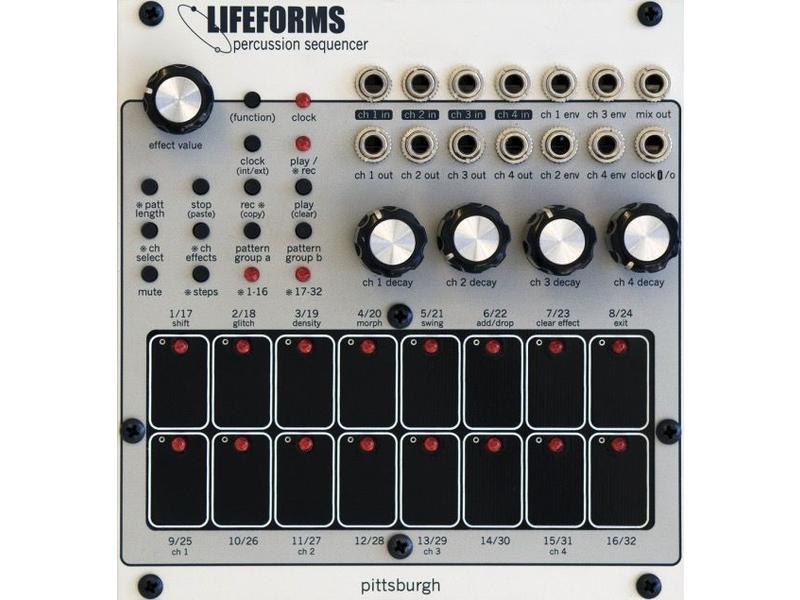 At the heart of the module is a 4 channel, 32 step beat sequencer designed for live performance. Seamlessly move around the module tweaking patterns and effects without ever stopping the beat. Create and store up to 32 sequences using live performance or step mode recording with pattern lengths varying from 1 to 32 steps. Patterns can be copy and pasted to easily create multiple versions of a beat. The sequencer is driven by an internal tap tempo or external clock source. A dedicated clock in/out jack syncs the sequencer with other modules.

Four Integrated Analog Envelopes and VCAs
Instead of limiting the drums to a few onboard voices or lo-fi samples, the Lifeforms Percussion Sequencer uses an analog envelope and VCA built into each channel to shape any audio source into a percussive instrument. The envelopes are designed with a razor sharp attack and variable decay/release allowing for maximum control over the output of each channel. The envelopes can also be used externally. A short envelope creates a trigger while longer envelopes can be used as a modulation source for oscillators, filters, or anything at all.

6 Adjustable Pattern Effects
The Lifeforms Percussion Sequencer includes 6 unique pattern effects to expand the musical possibilities of traditional grid style beat programming. Effects include everything from swing and beat shifters to glitch and generative algorithms designed to manipulate the sequencer pattern. Each channel can run a unique instance of one pattern effect at a time. A master pattern effect channel is also available that affects all 4 channels of the sequencer. The combination of the channel effect and the master effect allows for up to two effects at a time on each channel. Each effect has one parameter that can be adjusted to dial in the perfect response.