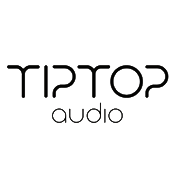 This collection of Pitch Programs for the Tiptop Audio Z-DSP module use a pitch shifting algorithm much like the earliest digital pitch shifters released. Sounds similar to the Eventide H910, AMS 15-80 (with Pitch board) and Publison DHM 89 can be achieved. These programs are intended more for pure effects rather than the complex multiple harmony lines later devices and plugins became known for producing. Chords from single VCOs can easily be made using the ‘Interval' programs on the card though.

Pitch shifting in the Z-DSP uses a technique called ‘rotating tape head' delay lines named after pioneering tape based experiments in Germany in the 1960s. The tape heads move at speeds independent of the tape playback path and two heads are crossfaded to make a continuous output. Much of Karlheinz Stockhausen's output of that era heavily (ab)uses the two tape machine method of changing pitch. Digital memory and processing allows the same method by manipulating two playback positions in memory and crossfading them using DSP. This is a fairly primitive process compared to what can be done today using FFTs (phase vocoder) and Time Compression and Expansion, but there is a certain sound associated with it that is unde- niably classic.