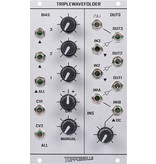 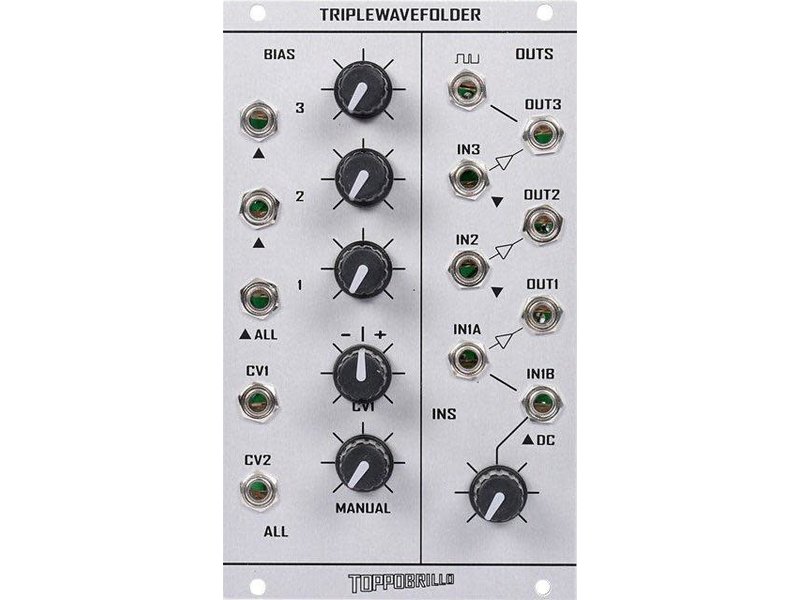 This item is used, has been fully tested and is guaranteed to be working. Triple Wave Folder

The TWF module was designed with multi-use in mind... it is composed of three identical (with the exception of a couple features) direct-coupled waveshaping stages that can be used independently or in series, the operation is selected according to which inputs are used.

Each stage can "fold" (GENTLY) an input source inward on itself as it approaches a threshold set by the panel controls and cv. For example, a sawtooth or a triangle input from a VCO can be bent into a sinewave, and beyond that- doubled in frequency, at constant amplitude... USE THEM IN SERIES AND THEY FOLD AGAIN AND AGAIN AND...some things you can do with it, under voltage control, simultaneously!

Create complex timbres from audio sources- Possibilities are really limitless. you can control each series of harmonics via the BIAS panel controls. So the overall sweep thru the folds when using the VCALL/ MANUAL controls is very flexible- and since each stage of the folding process is VC'able, you can use different modulation sources simultaneously for wild animation/ phasing/ beating with a single tonesource.