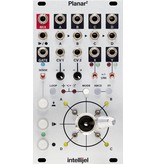 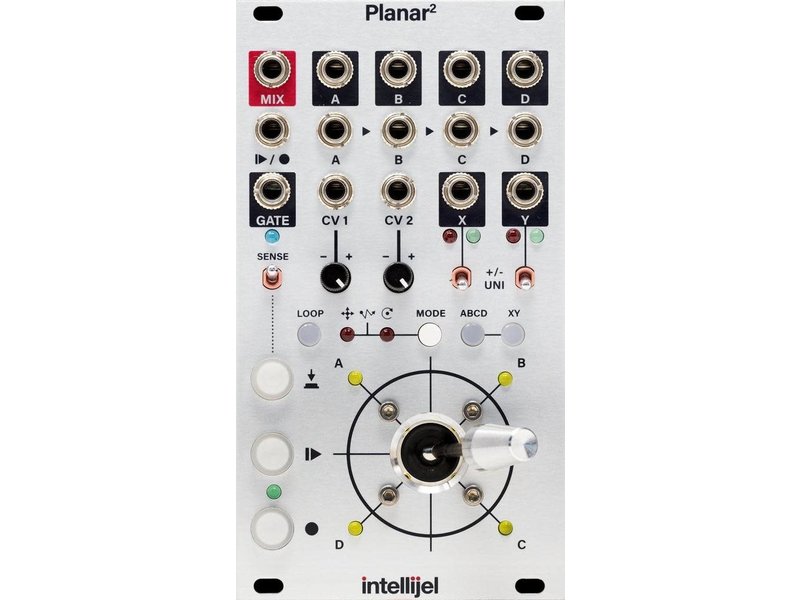 The most complex modulator is you. The Planar 2 puts macro control over six outputs-including a quad panning mixer-into your hands with a buttery smooth joystick. Record up to 30 seconds of your own movements, stretch it or mangle it with scan mode, use a trigger for playback, or just loop it-synced or not. Add yourself to your patch.

With its smoothly responsive precision joystick, Planar2 facilitates hands-on vector control of two entirely independent sets of outputs (quadrants A-D, and axis X/Y), plus the ability to capture and playback your gestures. Recording your joystick movements enables the creation of organic and complex envelopes, wild and wobbly LFOs, or extended sonic evolutions. It mixes, morphs, routes and pans audio inputs; triggers gates; outputs control voltages and is itself, CV-controllable. Planar2 puts the ‘joy' back in ‘joystick,' and the ‘fun' back in ‘function generator.' Its multitasking and tactile interface makes it a flexible and unique control device, no matter what your musical genre.

Features
• Vector control of two independent sets of outputs: one quadrant-based (outputs A, B, C, D) and one dual-axis based (outputs X and Y).
• X/Y Controller: two-axis CV generator sends either unipolar (0V to +10V) or bipolar (-5V to +5V) signal out the X and Y outputs.
• Four Quadrant Controller: With nothing connected to inputs A-D, outputs A-D become joystick-controlled individual unipolar (0V to +10V) control voltage sources.
• Quad mixing & crossfading: Vector mixing and crossfading of four independent inputs (A, B, C, D) to either individual outputs or the mixed output.
• Quad panning: connect a mono source to Input A and use the joystick to pan it to any of the four outputs. Connect a stereo signal to Inputs A and C and pan it forward and backward in quadraphonic space.
• Quad routing: Send audio to Input A and patch outputs A-D to four different processors (i.e. VCF, wave folder, delay, etc.), then use the joystick to dynamically route the signal through the different effects.
• Gate Generator: Generate gates either manually (by pressing the Manual Gate button) or automatically whenever the joystick is in motion.
• CV Gesture Recorder: Record joystick motions (including gates) to play back either as 1-shot complex function generators or as looped, LFO-like functions. Start time and length can sync to an external trigger, and punch-in/out recording is supported.
• External CV Inputs: In addition to its built-in joystick, Planar2 has two CV inputs, which allows external CV control of quadrant outputs A-D and axis outputs X/Y. A mode switch alters how CV affects these outputs, allowing for some advanced automation techniques (such as circular and spinning motions) that would otherwise be difficult to automate.