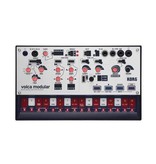 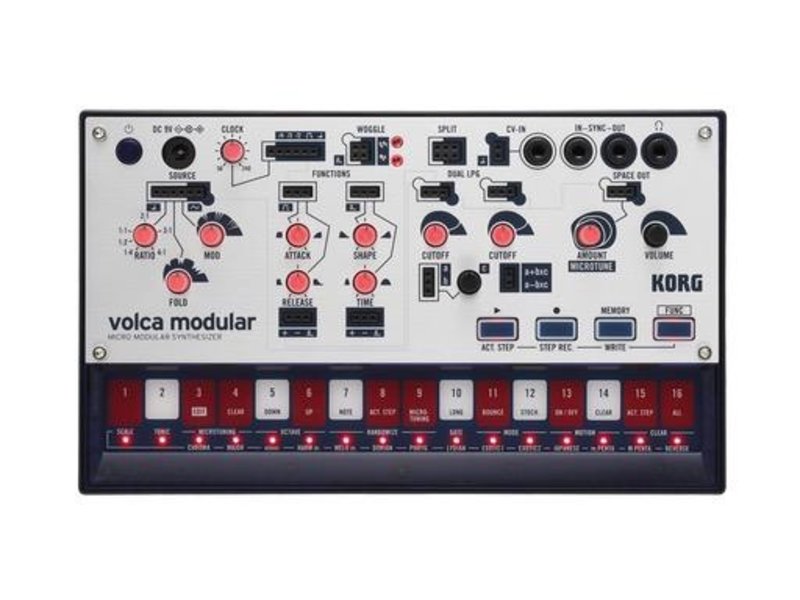 The volca modular is a semi-modular synthesizer consisting of independent analog synth modules, digital effects, and a sequencer. Each of the modules has been carefully selected for its stand-alone completeness. The modules are internally connected so that sound can be produced even before connecting the included pin cables, and the routing is shown by white lines on the panel. Module connections via a pin cable take priority over the internal connections, bypassing them.
The compact body of this volca synth features eight modules and 50 patch points. While learning the basics of a modular synth, you can use popular features of the volca synthesizer line to control a unique and different flavor of analog sounds.

Volca modular's modules are connected via the included pin cables, allowing a diverse range of combinations. The unit's compact chassis provides 50 patch points. Inputs and outputs are color-coded for recognition at a glance, and the signals are also marked by symbols to indicate audio, control, gate or trigger. Normally, each signal is connected according to its use, but on the volca modular, signal levels are universally compatible between modules, allowing hidden possibilities to arise from patching that defies common sense. Twenty pin cables are included, and also included is a reference sheet explaining each patch point and providing basic examples of patching.
While the volca modular is a semi-modular synth, it is equipped with a full-fledged 16-step sequencer providing a wide range of functions, letting you enjoy automatic performance even when used stand-alone.
Compact, size, battery operation, and built-in speaker mean that you can take this unit anywhere and enjoy playing at any time.

the Eight Modules
• SOURCE - triangle VCO carrier and a modulator
• Woggle - dual output random signal generator
• Dual LPG - two low-pass gate circuits
• Space Out - stereo module that applies a reverb-like effect to the audio signal.
• Functions - 2xEG, ADH
• Split - distributes one input to two outputs
• Utility - mixing scaling module that combines two signals in various ways. It can mix not only audio signals but also control signals, as well as inverting or attenuating those signals.
• Sequences - This module is for connecting to the internal sequencer. You can set the tempo, and select different rhythm divisions to output via the gate counter.