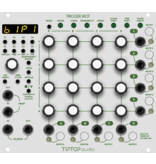 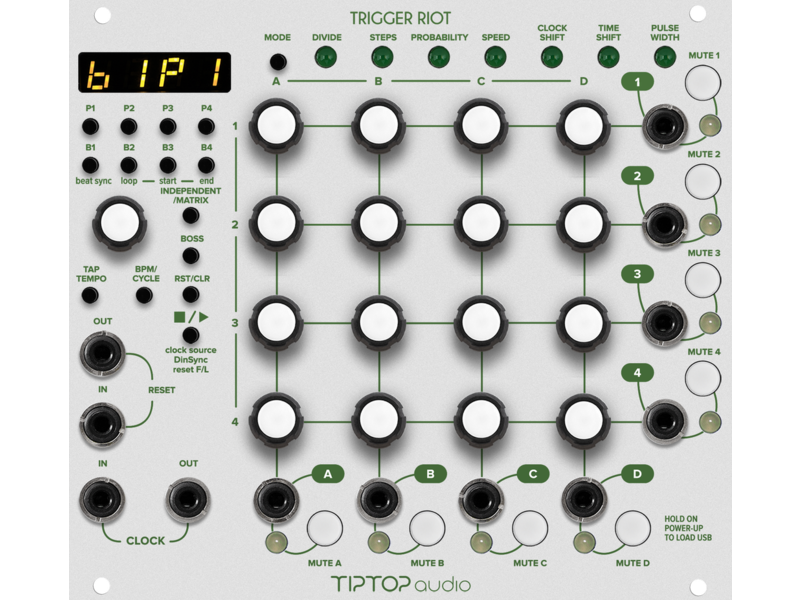 The Trigger Riot is a multipurpose trigger module that makes ultra complex patterns of gates triggers and clock pulses. The Riot covers a lot of ground in any Eurorack system from the master clocking for your entire system to algorithmic generation of pulses for envelopes, step sequencers, drums and accents that can venture into highly complex territory driven by simple yet powerful logic and algebra with a dash of pseudo randomness for some unpredictable results. The user interface allows a great deal of control over pulses with each knob acting as a clock divider, clock multiplier, step injector, time shifter, clock shifter, pulse-width modulator, and an arithmetic probability processor. Now take that control and multiply it by 16 and feed it into 8 outputs for maximum Trigger Riot madness!

Furthermore the interface features a master clock knob, push switches to mute unmute and select rows, and multiple switches to configure, adjust, create loops and save your work for later recall from memory banks. Trigger Riot integrates nicely in the studio with non-volatile memory, generous synchronization options with external gear including sample accurate sync with DAWs, smart synchronization to other Tiptop modules using SyncBus, and DIN Sync for vintage gear. A precise internal tempo clock generator with tap tempo and BeatSync to manage precise changes round out the features. 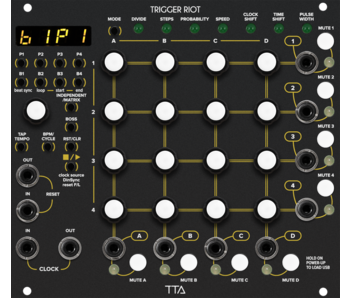