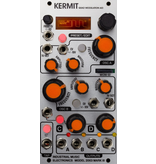 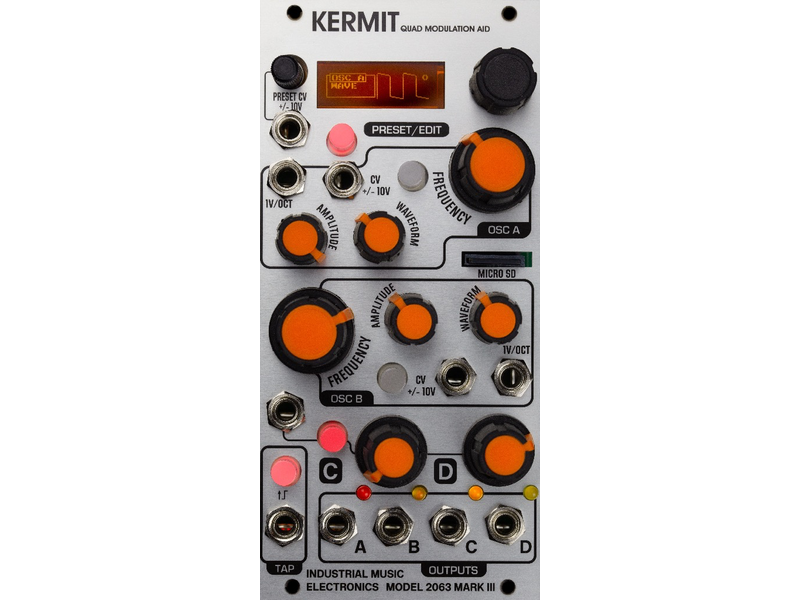 Kermit is a 4-channel, programmable, tempo-synchronized super-modulator with morphing wavetable generator and internal modulation matrix. Four channels operate as LFOs, audio rate oscillators (with 1v/octave response on two channels), 1-shot envelopes, random voltage generators, or sample-and-holds, all responding to manual control, external control voltages, or synchronization to the module’s master tap tempo clock, with every parameter storable as presets. External CV inputs and an internal modulation matrix provide most synthesis control and voice functions in a self-contained, programmable package. Designed for maximum patching power in small systems, Kermit has an extremely high functionality-per-HP factor and fast, recallable operation dependable in live performance. The module has a 16-bit DAC to accurately render subtle changes of voltage at extremely low frequencies. The audio oscillator mode is best suited for bass frequencies and has a fuzzy, aggressive character known from the previous version of Kermit. The waveform “character” processing further degenerates the quality of the signal along three axes of resolution all the way down to 8 bits/32 samples similar to the Konami SCC sound processing chip.. The tap tempo facility features an input jack and a manual button, and sets the global tempo of the module that individual channels can multiply or divide. The tempo is shown on the OLED display in BPM. The relevant units (hertz, seconds, volts, etc) or selected waveform of each channel are contextually shown on the display as the user programs the module.

Three parameters on each channel can be modulated: frequency, amplitude, or waveform. Both external CV input and internal cross modulation affect these parameters by holding down buttons and turning the destination knobs. For example: assign the output of channel B to morph the waveform of Channel A by holding the Channel B button while turning the Channel A Waveform knob. All channels have manual control of frequency (coarse and fine), phase, waveform bank, waveform morph, and amplitude. Channels A and B have full controls, C and D have single knob controls with deep parameters accessible by button hold combinations. The OLED display unambiguously displays the intensity of modulation setting in progress as well as the total catalog of all currently programmed modulation assignments. Kermit has a microSD card slot for loading custom waveforms, like its big brother Piston Honda. The SD card accepts one .WAV file in WaveEdit format (free software editor) containing 64 waveforms, also compatible with several other Eurorack modules. When loaded into Kermit, the waveforms are organized into 8 banks of 8 waveforms each. Each oscillator can select any of the 8 banks, and the 8 constituent waves can be smoothly morphed from one to another.

The Mark III morphing preset manager is in full effect on Kermit. The discrete preset mode quickly and reliably recalls all parameters in response to triggers or CV, accessing the true power of the module as detailed, carefully programmed settings are effortlessly loaded and changed. The morphing mode causes delightfully unexpected variations of the basis preset. Insert a master clock signal and you’re ready to go. Kermit is a bottomless provider of rhythmically coherent modulation voltages.