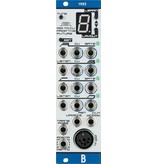 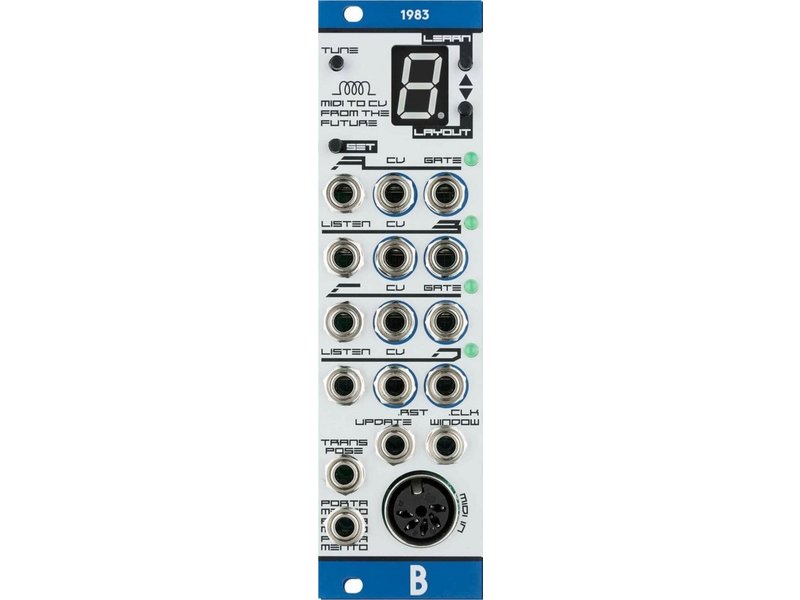 MIDI to CV from the Future

The 1983 is a polyphonic MIDI to CV interface with creative voice allocation and automatic tuning capabilities. There are four channels of CV and GATE outputs that can be configured in various Layouts, such as hybrid splits between monophonic and polyphonic voices or velocity, Control Change, aftertouch, triggers, clock or reset.

Automatic Tuning
Each channel is able to LISTEN to simple waveforms from the oscillators, and with a single press of the TUNE button, the 1983 maps the response of each connected oscillator across all seven octaves. This way it ensures everything is in tune and with each other and that it responds to the MIDI notes correctly ( A4 = 440 Hz etc.). PURE MAGIC!

CV Inputs
The TRANSPOSE jack shifts the outputs by semitones, fifths or octaves and the PORTAMENTO jack sets the glide time by CV. The 1983 always stores the notes played in a legato sequence in a buffer, and the WINDOW jack allows for selecting which of these notes appear at the outputs. When the UPDATE jack is used, it forces the outputs to update only when a trigger is detected. This way a MIDI keyboard can be used as an input interface for harmonies and note sets that are further creatively processed with triggers and CV in the modular environment.

Quantizer
The quad Quantizer mode on the 1983 converts input voltages into semitones of scales defined either by playing notes into the MIDI input or by the buttons in the menu. This allows the 1983 to be used tuning correction device (quantizer) without the necessity or using MIDI. MICRO TUNING Default tuning is A = 440Hz in equal temperament, but alternative tuning systems are possible with the µTune feature. It allows working with custom detuning of each semitone in the octave and therefore to work with just intonation and alternative tuning systems.