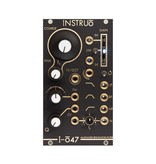 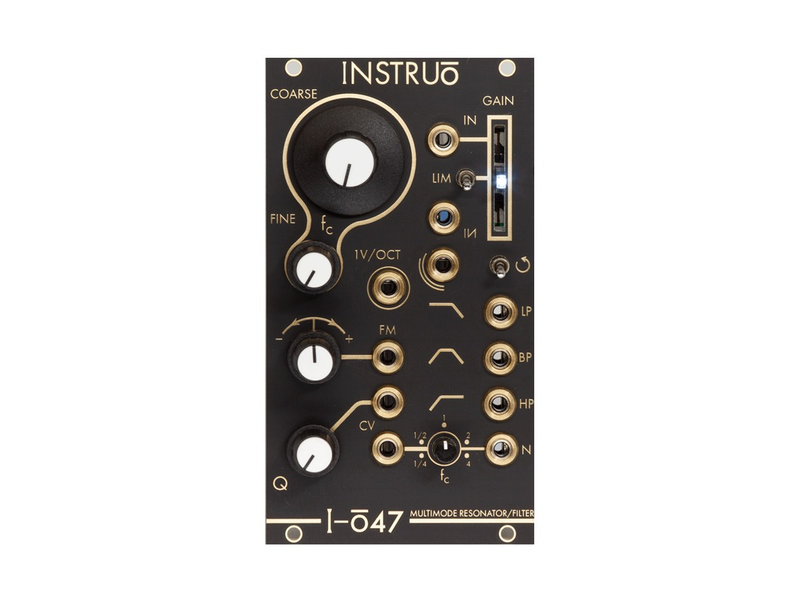 I-ō47 Multimode Resonator/Filter is a modern take on a vintage circuit design inspired by the classic 1047 module of the ARP2500. It has been designed with some extra features and quirks built in. The internal VCA’s are a new hybrid design of matched transistors and precision op-amps. With CV controllable centre frequency, resonance/Q and notch offset along side FM, strike and a complex dual input with wave shaping limiter, the I-ō47 is truly a filter for all occasions.

There are two audio inputs on the I-ō47. The top runs through a gain stage, set by the fader, and has an optional limiter in line with it selected by the LIM toggle switch. With a simple sawtooth wave, the limiter will gently curve the ramp and result in subtle enhancement of the low end of the signal’s tone. For more complex audio signals (drum voices work a treat!) the limiter will give very musical results akin to gentle compression/overdrive, all the way to limiting and saturation. The inverting input inverts the polarity of the input signal. This input is also directly affected in amplitude by the Q (resonance) control. As resonance increases, the signal amplitude will decrease, acting as a form of automatic gain compensation. Both inputs can be used simultaneously to mix two independent audio signals. The feedback toggle sends an additional branch of the band-pass signal to the non-inverting input and allows for stable self oscillation of the Filter. It can be used to kick the resonance response up a gear. The strike input can be used to ‘ping’ the resonance of the filter. It is designed to respond to signals at audio rate which allows for its use as an input for square wave tones.