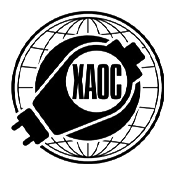 Sofia is a fully analog voltage-controlled oscillator (VCO) based on an original waveforming principle. It features a modern, well-calibrated, temperature compensated triangle core and two elaborate waveshaping and modulating sections. The sound is a mixture of a warm, saturated base tone and two ripple components. Besides its main output, Sofia offers access to individual components of the sound plus a multitude of modulation inputs allowing for extensive self-patching and animation of the waveform. To better understand the device, we strongly advise the user to read through the entire manual before using the module

Sofia implements and extends the classic computer music method for synthesis of formant sounds called FOF (fonction d’onde formantique), which uses a combination of simple, time-domain components (decaying sinusoidal waves) to achieve desired spectral characteristics.
In Sofia, two of such ripple elements are added on top of a slightly saturated sinusoidal base tone. Each new cycle of the base tone spawns a new pair of ripple elements. The ripples’ density and decay rate may be adjusted over a wide range. Additionally, the elements may be warped so that their density accelerates or decelerates within the cycle. Finally, their basic waveform may be switched from sine-like to square-like for additional richness.
Despite the seemingly divergent frequencies present in the signal, it remains strictly harmonic due to how all elements are waveshaped from the core tone and therefore phase coherent. Thus, Sofia is not a complex oscillator in the Buchla sense; however, it goes beyond the traditional set of primary waves and wavetables, hence the name.