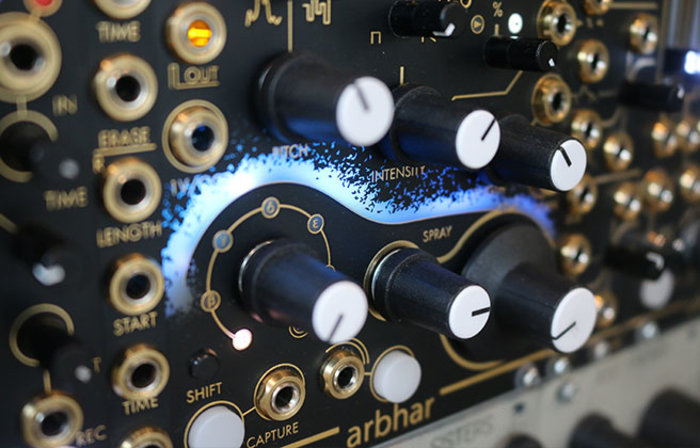 Imagine a digital photo, consisting of hundreds, or maybe thousands of pixels. Each pixel has its own color, brightness, and size (among many other parameters). Together these pixels create a texture, and when organized in their correct order, they create a recognizable image. Now imagine taking each individual pixel and placing them in a random order. Imagine changing the color and brightness. Go a bit further and imagine changing the size of each pixel, creating little spaces of nothingness in between them. The image we end up with is far different from the original. Unrecognizable, even.

Now imagine the same process with sound, taking small fragments of sonic information and reordering their placement, transposing their pitch, truncating their size, and designating their density - that’s granular synthesis.

Instead of visual pixels, we’re dealing with auditory grains.

Granular synthesis only exists within the digital domain and therefore only deals with samples. These samples can be digitally computed waveforms like sine, triangle, sawtooth/ramp, or square (remember wavetables?) or captured recordings like claps and snaps, a purring cat, or the applause of an audience. In the modular world, samples can even be captured from live recordings of the other modules within the system.

Now granular synthesis is a deep and vast science with entire textbooks written on the subject. If you’d like to go deeper, I highly suggest the book Microsound, by Curtis Roads or The Csound Book by Dr. Richard Boulanger. What we’ll be dealing with is granular synthesis within the modular realm - different styles of implementation, what modules “do the thing”, and the associated terminology.

Granular synthesis comes with a lot of commonly used buzzwords to help describe the process and outcome. We often talk about grains, textures, particles, clouds, slices, splices, and genes. Every module has its own set of buzzwords and it's more or less safe to say that they are all pretty much referring to the same thing - tiny bits of audio.

There are plenty of granular synthesis modules in Eurorack, but I’m only going to focus on “the big four.”

The Nebulae can record up to 5 minutes of stereo audio. Clouds can record anywhere from 1, 2, 4, or 8 seconds of audio based on its sampling rate, bit resolution, and number of channels (mono or stereo). The big difference here is that by default, Clouds is always recording and immediately processing audio (in part due to its small buffer size) whereas the other three modules need to be set to constantly record.

Some granular synthesis modules like the Make Noise Morphagene and Qu-Bit Electronix Nebulae V2 allow for samples to continuously loop over time. All this means is that when the sample reaches its end point, it immediately resets to its start point. The Nebulae has controls for the loop start point and the loop size, allowing for the sample to loop around at different sections of the buffer while also shortening the global size of the loop. The Morphagene is really more of a tape-splicing emulator, and allows for splices to be made which creates shorter loops out of the original loop. Because the splices can be made so tiny, they can become grains, which they call “Genes.”

One of the biggest differences between granular synthesis modules is how pitch changes are implemented.

The Nebulae, however, uses a computer music method called phase-locked vocoding. This allows for pitch and speed to be changed independently. Again, playback can be sped up, slowed down, and reversed.  Unlike vari-speed, when the speed of a phase-locked vocoder is set to 0, playback does not stop, but actually freezes the buffer.

In granular world, we often talk about windowing. Essentially it's just a fancy word for the amplitude envelope of the grain. By now, after playing with envelopes and VCAs in subtractive synthesis, you’re aware that many different types of envelopes exist and they all have a different effect on the sound.

The rate at which grains are generated varies from module to module.

arbhar behaves the same way, where the intensity and length controls both determine the rate of grain generation. Same story, different book.

Nebulae, on the other hand, has a dedicated density control that is similar to changing a clock rate on a control module. It’s grain length control, which they call, “Overlap,” changes the length of the grains, but does not influence the rate at which grains are generated.

WIth the right settings, all three of these modules can produce polyphonic grains that play on top of each other, allowing the user to create chord-like harmonic structures, or noisey madness.

It’s also important to note that all three of these modules have the ability to generate grains asynchronously, meaning that grains are not forced to generate at a steady rhythm. Grains can also be externally clocked to be in time with the rest of the system.

Within the familiar sounds we know and love is an entire universe of particles, clouds, textures, and microsounds. I encourage everyone to experiment with different and interesting source material and explore what lies beneath the surface and between the lines. The more complex the source material is, the more vast the microsonic universe.

To hear some amazing examples of granular synthesis, I’d like to point you towards these very important pieces of music and video references: