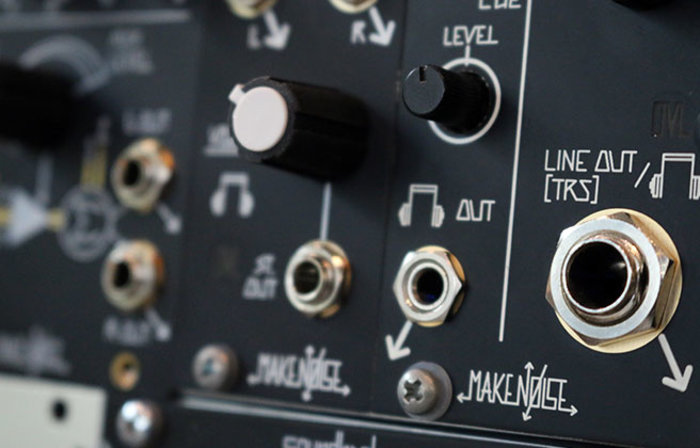 Our sound now has all the necessary ingredients. It has a designated pitch, timbre, amplitude, duration, and rhythm - and all of these parameters can be modulated and controlled by the different functions we’ve previously discussed.

That being said, there is a laundry list of other modular functions that can be added to any system. Utility modules help maintain the control voltage signals within a modular system and can be used in many different contexts.

A passive multiple (often called a Mult) acts as a signal splitter. They have one input and several outputs. Passive multiples do not require any power to function so they can be modules like the 2hp Mult, stacking cables like the Tiptop Audio Stackcables, or stand-alone units like the Intellijel Magnetic HUBS. Since they do not have power, the signal will slightly attenuate with each patched output. This means that the more copies there are of the signal, the lower the signal level. We don’t recommend passive multiples for signals like 1V/Octave CV or audio, but they are great for signals like LFOs, envelopes, clocks or anything that can be slightly less precise.

It’s important to note that passive multiples are for splitting a source signal to several destinations. They are not for mixing multiple source signals to one destination. Doing so can potentially harm modules in the system.

A buffered multiple like the Intellijel Buff Mult or the Steady State Fate Clone work exactly like a passive multiple, except it does require power to function. Because they draw current from the power supply, they have the ability to split precise signals like 1V/Octave CV or audio. They only exist as modules.

Again. It’s important to note that buffered multiples are for splitting a source signal to several destinations. They are not for mixing multiple source signals to one destination. Doing so can potentially harm modules in the system,.

An attenuator will scale the amplitude of the incoming signal. They can only output a voltage that is <= to the incoming signal, meaning they cannot be used for amplification. They are often included before the corresponding CV inputs on bigger modules like complex oscillators and filters, but they also exist as single modules. Attenuators are usually passive like the WMD / SSF Quad Attenuator.

Attenuverters are similar to attenuators, but in addition to scaling, they can also invert (and invert scale) the amplitude of the incoming signal. Again, they are often included before the corresponding CV inputs on bigger modules. Attenuverters are always powered, and sometimes have different settings allowing for attenuation, attenuversion, or cascaded mixing functionality like the Mutable Instruments Shades V2 or Intellijel Triplatt. The Triplatt even has toggles for voltage manipulations on a per channel basis.

We talked briefly about slew limiters in Basic Synth 4: LFOs, Envelops, & Random Voltage. Slew limiters (also called lag processors) smooth the hard edges of discrete voltage levels. For instance, if portamento is needed between notes within a sequence, simply patch the 1V/Octave signal from the sequencer to a slew limiter. The curve of the slew can then be defined with shape controls, often called rise and fall. Some examples would be the WMD / SSF Mini Slew, the Roland System-500 555 Utility, and the Make Noise Function. Slew is also often referred to as portamento, glide, or lag.

For those who are familiar with working within a Digital Audio Workstation like Ableton, the term quantization is well-known. Most of us think of it as forcing timing data to adhere to a fixed grid in order to create perfectly timed rhythms. In modular synthesis, we can do the same thing with continuous control voltage signals.

When talking about CV quantizers, it’s important to understand one basic rule - its the control voltage that controls the oscillator that gets quantized, not the oscillator audio signal.

Let’s go further and say that the previous patch makes the oscillator’s pitch travel over too many octaves and I want it to only travel the span of one octave. I’d just simply add an attenuator in between the LFO and the quantizer, attenuating the amplitude of the LFO before its signal reached the quantizer (patching the attenuator after the quantizer instead of before would result in out-of-tune notes).

Quantizers often have preset scales and some even have the ability to set user-defined scales. Some examples of quantizers are the 2hp Tune, Intellijel Scales, and Tiptop Audio QuantiZer.

Waveshapers are a great way to transform waveforms into other waveforms. This can be done by clipping, limiting, and distorting signals with modules like the Instruō tanh[3]. It can also be done with wavefolder modules like the Antimatter Audio Crossfold, Instruō athrú, WMD / SSF Ultrafold Wavefolding is an interesting type of distortion that forces the clipped portions of the waveform to invert upon itself, resulting in very rich waveforms - a perfect module for additive synthesis!

Clock generators are often included on other modules like LFOs, sequencers, random voltage generators, etc. But they can also be very simple modules all on their own like the 2hp Clk. Essentially, a clock signal is a 50% pulse width square waveform LFO. They are used to clock other modules. Clock signals are the heartbeat of the system.

Clock signals can be divided and multiplied. This makes it possible to create rhythms and trigger events based on simple calculations. 4ms Company has always had the go-to clock divider/multiplier modules like the Rotating Clock Divider (RCD), the Shuffling Clock Multiplier (SCM), and the Quad Clock Distributor (QCD). The QCD also can be internally clocked as well as externally clocked, so it can be considered a clock generator as well.

Some modules have associated expander modules that increase the functionality of the module. Again 4ms Company has some great examples, like the Rotating Clock Divider Break Out, the Shuffling Clock Multiplier Break Out, and the Quad Clock Distributor Expander.

A sample and hold will do exactly that - With every clock signal, a new voltage is sampled and held at that level for the duration of the clock signal. Some examples are Mutable Instruments Kinks and Steady State Fate DIVKID Rnd Step.

Anyone who uses external gear with their modular system would benefit from I/O modules to help attenuate and amplify signals respectively. Because the level of Eurorack signal is so high it needs to be attenuated before being patched into things like pedals, external FX, etc. Similarly, line, mic, and instrument level signals to low and need to be amplified before patched into the modular system. These can be separate functions like the Erica Synths Pico Input and Erica Synths Pico Output, or combination functions like the 4ms Listen I/O and Intellijel Audio Interface II.

Mixer modules are great for many purposes and come in many different forms. Some are simple multi-channel mono-output mixers. Some are multi-channel stereo-output mixers. Some have VCAs built in. This list goes on. Mixers are often used for mixing audio signals together like traditional outboard mixing consoles. They can also be used for mixing control voltage signals together - in this case, it’s important that the mixer is DC coupled, meaning it can handle both audio and control voltage signals.

Unity mixers like the Intellijel Unity Mixer keep all signals at unity gain when is wonderful for control voltage, but can cause audio to clip.

Averaging mixers like the Mutable Instruments Links take an average of each input signal and attenuate as needed. This is great for audio signals but wiill cause control voltage to be lower than the original signal. Some even step Eurorack level down to line level, have ¼” output jacks, send and return I/O for effects, and have headphone drivers.

Some modules even balance your outputs and convert signals to professional standards like the Make Noise XOH or the WMD Pro Output.

Very much like the guitar pedal world, there are many modular effects. What makes modular effects so much more exciting than guitar pedals is that most parameters are under voltage control. Everything from distortion like the Noise Engineering Viol Ruina, to reverb like the Tiptop Audio ZVERB, to delay like the Make Noise Mimeophon.

For those who love to work within Digital Audio Workstations, a MIDI to CV converter module is needed for synchronizing with and sequencing from the computer or other MIDI compatible gear.

These types of modules will take digital MIDI data and convert it to control voltage signals. They are great for changing Note On/Note Off Messages to gate signals, changing pitch data to 1V/Octave control voltage, and CC messages to LFOs and one-shot envelopes. It’s also used for transforming MIDI Clock and Start/Stop messages to clock and trigger signals. Some options for MIDI modules are the Hexinverter Électronique Mutant Brain, Intellijel µMIDI, and the Polyend Poly2.

Traditionally a piece of test equipment used to show a visual representation of both AC and DC voltage. Some of these types of modules offer other features like tuners, spectrographs, voltage monitors, etc. I suggest all synthesizer enthusiasts own an oscilloscope of some type, as they are extremely helpful when understanding what is actually happening to the oscillator’s waveform as it goes through all of its processes.

There are several oscilloscope modules like the Mordax DATA, David Jones O’Tool+, and the Intellijel Zeroscope 1U.