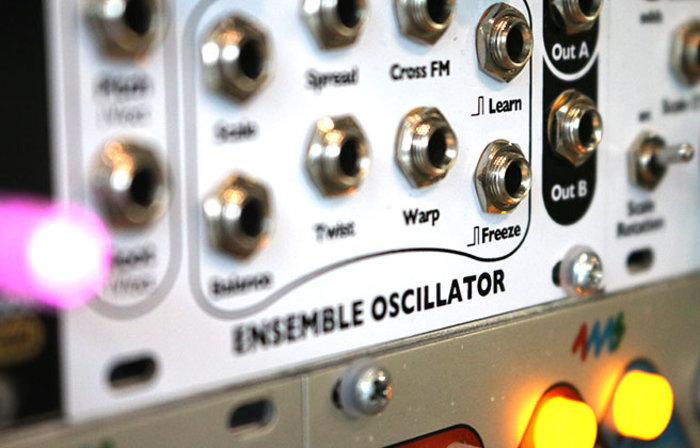 In modular synthesis, we begin our journey with a sound source - an example of which would be a periodic waveform such as a sawtooth waveform or a square waveform generated by a voltage controlled oscillator (VCO). This waveform is created by a voltage signal. This voltage signal oscillates at the frequency (speed), amplitude (loudness), and waveform (harmonic content) set by the oscillator's controls. The initial signal is generated by the oscillator and perceived as a sound. It is then processed and controlled in different ways along its signal path as one module is patched to another (… and another… and another!).

In this post, we're going to talk about some key concepts of sound, waveform identification, and oscillator types. But for now, here are the big questions that come to mind:

Think of your room fan at your home. It's likely that there's a button on it called, "Oscillate." When you press it the fan moves from side to side at a set speed. Oscillations of voltage behave the exact same way, but they move up and down and at much faster speeds (frequency), in definable shapes of movement (waveform), and in definable depth (amplitude).

Specific collections of harmonics define a waveform. For instance, a single fundamental frequency with no partials will create a sine waveform. Adding odd-numbered harmonics that decay in amplitude as they increase in frequency can change the sine waveform into a triangle waveform. Adding even-numbered harmonics (with the same behavior) on top of triangle waveform can change it to a sawtooth/ramp waveform - so on and so forth, forever and ever. I like to think of waveforms as the actual contour, or shape of voltage that is being generated by the oscillator.

Waveforms can be generated by analog circuitry or digital computing. Both have their own characteristics and uses. For instance, analog circuitry can never produce mathematically true representations of waveforms and different types of oscillators will have different inconsistencies. Some say that the imperfect circuitry of the analog method creates waveforms with a warm and deep character. Instead of being created with circuitry, digital waveforms are generated by a computer chip. At higher resolutions, they can sound very pure. Some say these can even sound lifeless due to their lack of inconsistency. Digital waveforms at lower resolutions create waveforms that are more harsh and abrasive. Realistically, both the analog and digital methods have merit and can be used for wildly different sounds - our suggestion is to use both!

Oscillators come in many different configurations. Some big, some small, and they often have a plethora of available waveforms and features.

Oscillators exist on keyboard synthesizers as well and are usually found close to the left-most section of the synthesizer's panel.

Basic oscillators have coarse and fine tune knobs that will change the pitch (frequency) of the oscillator as well as a 1 Volt per Octave control voltage input (1V/Oct) to externally control the pitch of the oscillator. Some might even have a pulse width modulation, frequency modulation, or synchronization capabilities via panel controls or CV inputs.

Basic oscillators are often (but not always) analog.

The idea of the complex oscillator comes from an infamous module called the Buchla 259 module.

Complex oscillators can have added features such as:

Complex oscillators are often (but not always) analog.

When analog, the available waveforms are also derived from oscillator cores - one per oscillator.

Filters are actually going to be our topic for our next post in the Basic Synth series, but let's quickly talk about how they can be used as an oscillator.

This goes back to the "everything is an oscillator" concept that I mentioned earlier.

Lowpass filters are commonly used to subtract high frequency content (harmonics) from a waveform, but they are also used to create sine waveforms without any input signal whatsoever. The way this works is by setting the resonance of the filter to its maximum setting (the resonance parameter is also referred to as the emphasis, feedback, or Q of the filter). When the resonance of a lowpass filter is peaked, the signal feeds back into itself and self-oscillates at the frequency set by the lowpass filter's cutoff parameter. Some filters are even calibrated to 1 Volt per Octave (1V/Oct) and can be externally pitched tracked.

Everything Is An Oscillator:

Not only can dedicated oscillators and lowpass filters be used to create periodic waveforms, but low frequency oscillators (LFO), cycling envelopes generators (EG), and clock signals can also be set to oscillate at sonic frequencies.

Thanks for checking out our blog and learning modular synthesis with us!