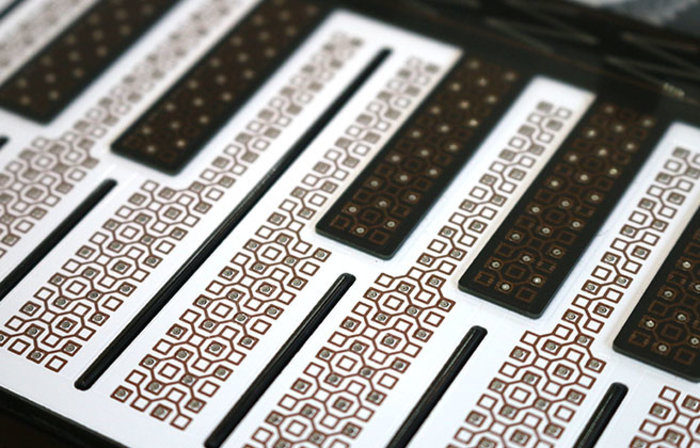 One of the more interesting ways to effectively modulate your patches is through the use of alternative controllers. This idea originated with the more esoteric modular systems of the early era of electronic music like the Buchla Music Easel, the EMS Synthi VC3, and the Serge modular synthesizer. LFOs, envelopes, random voltage, and sequencers are all incredibly useful sources of modulation, but nothing makes a synthesizer feel more like an instrument than being able to manipulate your sounds at the touch of your fingertips.

Capacitive controllers are copper plate touch surfaces that actually use the electrons from your body to complete an electronic circuit. The amount of voltage generated is directly proportional to how much skin is touching the copper plate. I’ve personally always found this method to be particularly interesting, because the performer actually becomes a part of the instrument (“Be one with the patch” in Yoda voice).

As mentioned before, this method was popularized by early Buchla and Serge systems, but has been reborn in the Eurorack format. Our friends at Make Noise played a huge role in the rebirth of capacitive controllers with the introduction of the Pressure Points and Rene’ modules. Soon after, other modules and accessories were introduced, like the Sound Machines LP1lightplane and LS1lightstrip, and the Landscape Stereo Field and AllFlesh.

FSR (force sensing resistor) controllers add true pressure sensing to your modular system where the harder you press the membrane, the higher the generated voltage. Intellijel makes a wonderfully useful FSR module in their 1U format. Where the Make Noise Pressure Points works based on the amount of skin contact, FSR controllers work based on actual force applied to the membrane.

Joystick controllers are some of the most fun controllers to use because of their historical association with video games. Again, as mentioned before, this style of controller was popularized by the EMS Synthi VC3 expertly used on the song On The Run on Pink Floyd’s iconic Dark Side Of The Moon record.

The Intellijel Planar 2 is probably the most feature-packed joystick on the market. Two control voltage signals from the X-axis and Y-axis, as well as a four control voltage signals based on the four quadrants of the plane are generated from the joystick's position. The most exciting feature is the ability to record 30 seconds of joystick movement.

Manual buttons on synthesizers go all the way back to the ARP 2600. Not only are they useful for testing patches before they are set to continuously run, they are also great for sporadic, planned, musical events. I personally love to patch a bombastic explosion sound to be fired off by a button press.

These modules can often be largely overlooked, but I require them in any of my complete system. The Antimatter Launch Codes + Expander and the Noise Engineering Variatic Basicus are great examples of manual button modules.

Touching the copper plate on the front panel sends signal to the contact microphone mounted on the back of the module. This signal then gets converted to a manual gate signal, an envelope followed signal, and an audio signal. This can be used for clocking sequences, pinging low pass gates, or triggering envelopes. Ears is a true Swiss Army knife module that is needed in every system.

The Expert Sleepers FH-2 is an awesome MIDI to CV converter and MIDI host module with MPE functionality. This handy little module allows for the connection of MIDI controllers to convert MIDI data directly to CV signals. This topic is dense, so without going through every single MIDI controller, I’d like to draw attention to the Sensel Morph with the Buchla Thunder overlay, which replicates the controller scheme of the legendary Buchla Thunder and the Launchpad Pro MK3 which gives sequencing and trigger functionality.

One of the most adopted methods used for triggering and controlling sounds is with drum pads and was popularized by the early AKAI MPC samplers. Probably the most widely used pad controller with direct CV and trigger functionality is the Arturia Beatstep Pro. That being said, the Beatstep Pro is not just an eight voice drum pad controller/sequencer, but also two separate 64 step pitch and trigger controller/sequencers.

I’d be remiss if I didn’t talk about the Expressive E Touché which provides a wooden surface to tap, swipe, and wiggle in many different ways, providing controller signals to be output via MIDI and CV.

Having alternative controllers in a modular synthesizer system is one of the most important things for musicality and instrument interface. They are the tools that allow the synthesizer to perform like any traditional musical instrument and offer a more hands on approach to sound design and composition. Gestural control, afterall, is what creates phrasing, tone, and timbre.